What is SMPTE 2110 ? And What Does Distributed Production Mean for Broadcasters? 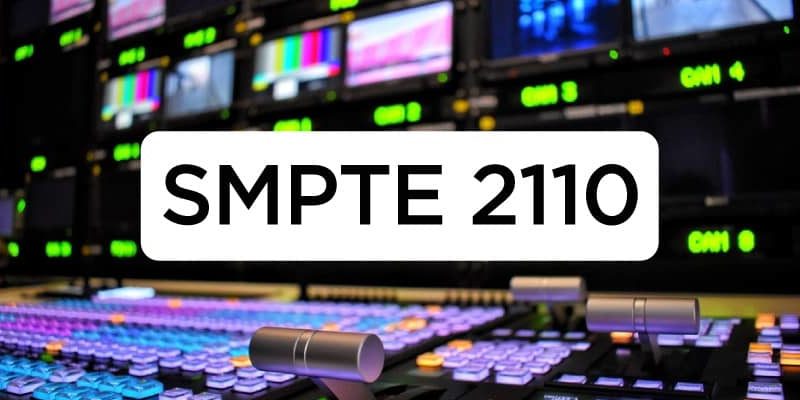 To some, the emergence of SMPTE 2110 is indicating the end of the “Wild West” of broadcast contribution over IP, and the beginning of clear standards for broadcasters and vendors. But what is SMPTE 2110? And why is distributed production important?

In this post, we’re going to give a high-level explanation of SMPTE 2110, and what distributed production will mean for broadcasters.

SMPTE ST 2110, released by the Society of Motion Picture and Television Engineers, is a suite of standards for transporting media including digital video over IP. These standards serve as a guideline for vendors, allowing them to develop new products that can be interconnected with other ST 2110 compliant products. The release of these standards is an important moment in video and broadcast production, as these standards not only indicate that the industry is fully embracing video over IP, but that the industry sees video streaming as the future for broadcast.

There are a number of parts to the SMPTE 2110 standard, from addressing how uncompressed video and audio streams are to be handled, to delivery timing, to mapping metadata. One of the unique aspects of SMPTE 2110, compared to previous video transport standards such as SDI or SMPTE 2022, is that it allows for distributed production.

Distributed Production: An Essence-Based Approach vs a Bundled Approach

To help explain the essence-based approach of distributed production, we should first understand the bundled approach, used by previous standards. SDI and SMPTE 2022 route streams as one package, bundling the video, audio, and metadata components into one stream.

With SMPTE 2110, these elements are managed separately, and can all be routed through different workflows. This is particularly helpful for broadcasters who are more concerned with flexibility and quality than bandwidth consumption. And this flexibility truly enables broadcasters to optimize how they use their resources. Broadcasters can transport individual media elements to specific workflow stations – with distributed production, your audio and video producers don’t necessarily need to be in the same building, to produce your content.

The End of SDI?

Not yet. In fact, SMPTE 2110 includes elements to ease the transition by incorporating certain components of SDI – it retains the option to send streams as a bundled package, which is important for broadcasters who are still more concerned by bandwidth use. And there are still other options available, including NDI, which is a royalty-free standard developed by Newtek for transporting production video over IP networks. NDI can be used to supplement and feed contribution content into SMPTE 2110 workflows when configurations need to be kept simple, at the cost of some compression to keep bandwidth consumption for HD content below 100 Mbps.

SRT, an open source transport protocol developed by Haivision, can also contribute to workflows and video production architectures that include SMPTE 2110. The bandwidth requirements of SMPTE 2110 (~2-3 Gbps for HD video depending on overhead, lossless compression, and other assets) means that it is not always suitable in situation such as remote production (REMI) over internet where bitrates need to be much lower. SRT is content agnostic so can transport compressed HEVC or H.264 into a SMPTE 2110 based production workflow, or even NDI over SRT. Though SMPTE 2110 may replace SDI over time, there will still be room for other IP streaming alternatives especially for the first and last miles.

Moreover, as with any major change in an established industry like broadcast, the shift to adopt SMPTE 2110 will be a gradual one. Even the release of SMPTE 2110 has been a long-term project. There were discussions about SMPTE 2110 as early as 2017, but SMPTE 2110-22, SMPTE Standard – Professional Media Over Managed IP Networks: Constant Bit-Rate Compressed Video, was published in August 2019.

It appears clear that more broadcasters are moving to embrace IP for its flexibility and efficiency, which is opening doors to new content creation opportunities. With the SMPTE 2110 standards emerging, to be adopted by vendors over the upcoming years, broadcasters who want to stay ahead of the content creation curve will need to embrace workflows over IP.